Day 290 — If the Lok Sabha elections for 2019 are held on the exact same dates as that in 2014, there are 290 more days/opportunities for the incumbent and the opposition to put political dead cats on the table. I have borrowed this interesting thought from an  article written by Shivam Vij, I read on Monday.

But that was for later in the day. Early on Monday morning (well, not exactly early by the standards of those that have a job), at around 8 am, the first Facebook post that I woke up to on my feed was the attached picture shared by Vinod K Jose, the executive editor of the Caravan Magazine (Vinod Jose happens to be one of the few for whom I have activated the Follow First option on FB. A giveaway regarding my political leanings, isn’t it?). 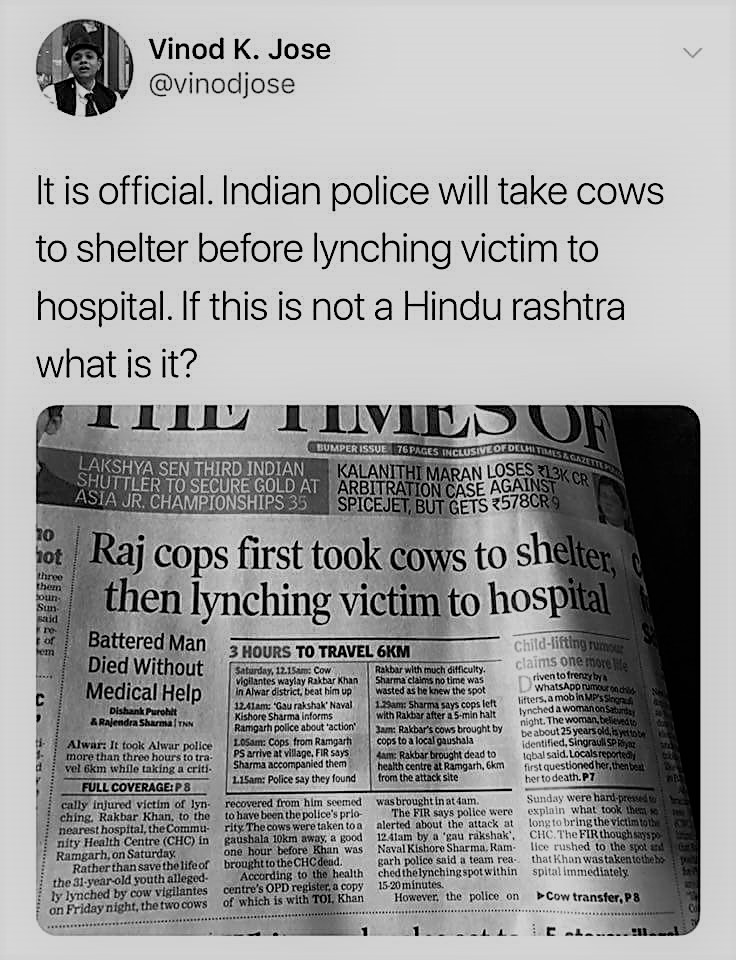 When I used to work (this I fear is going to become a repetitive trope), I had subscribed to the hard copy of the Caravan magazine. Very few companies in India afford the kind of luxuries that mine did – a newspaper of  your choice at your desk every morning, a magazine of your choice at your desk every fortnight, a cup of tea at your desk every few hours. There was a time when they would even serve buttermilk as an appetizer before lunch, much to the liking of the buttermilk-crazy faction. The cost-cutting focussed CEO, who had total disregard for the local sentiment, eventually got the better of that.  I hear that he recently got the better of free curd that used to be on the house too, citing the inordinate amount of LPG that got consumed to make the curd out of milk for the entire office of 100 odd employees every day. (Tbh this is still not a reason to complain – the rest of the lunch sans curd is still on the house/office – a rarity in today’s corporate environment). As regards the Caravan magazine, now I have to make do with the Kindle Unlimited edition.

Anyway, as is evident from the above paragraph, Monday morning was a nostalgic affair. One of my 2 flatmates was moving cities – he had been transferred. Earlier this morning (Wednesday), he put in his papers – so now he’s changed both the city and the job.

Vinod Jose’s tweet, kept playing itself out again and again in my head, as I bid farewell to my flatmate.

What had shocked the world, was not the fact that a cowherd had been lynched in the middle of the night, but that the cops who had arrived on the scene within minutes, had prioritised taking the two cows in question to the cowshed a.k.a. cow safehouse a.k.a. gaushala, over taking the critically injured Rakbar Khan to the hospital.

The lynching of the cowherd, on its own was hardly shock-worthy. After being bombarded with news about lynchings for 2+ years, the term lynching doesn’t shock us any longer. The Muslim cowherd/cattle-trader has been completely dehumanised in our minds.

I do not know if it is right to draw parallels, but I do wonder if this is how the German population would have been desensitised to the killing of the Jews in the concentration camps. Surely the news of the Jews getting killed en-masse in concentration camps would have at some point in time stopped shocking the readers. (I would never have drawn the German/Nazi comparison with lynchings on my social media account. Those with contrarian views would have lynched me online for being a propagandist).

It took the gross negligence and complicity of the cops, for the common reader to get shocked. Maybe in a few months time such complicity would lose its shock value too. Maybe there will come a time when only witnessing a lynching live would shock us. Maybe there will come a time, when we will move beyond that too. Maybe there have been such times before, and we as a society have just passed through a long period of unusual calm/lull and naively gotten accustomed to the same.

I wanted to write an FB post on the topic, but never got around to. And now the topic is stale. Maybe I will write one after reading the news of the next lynching.

A moving post by a popular junior from my college on the topic, later that evening, for some reason made me feel like I had abnegated a responsibility by not voicing my opinion on Facebook. (As an aside, no matter how old we get, time will never be an equaliser. A junior from college will remain a junior, for posterity). Despite being acutely aware that such posts don’t amount to much, guilt consumed me. Guilt is almost as bad as self-doubt.

Nonetheless, I had shared the image of Mr Jose’s post on my engineering Watsapp group earlier that morning.

I am fairly certain that until about a year back, this would have met with either  condemnation or quiet from the group of 69 participants. But on this Monday, a heated discussion raged, with the cow-sympathisers raking up the history to point out that the cow has always been a revered/protected animal, and that it is only the dirty, devious British that introduced the concept of beef-eating in the sub-continent. There was a consensus among the far-right* in the group that for such lynchings to stop, restraint has to be exercised by the supposed victims and consumption of beef in India has to stop.

The moderate-rights* took it upon themselves to battle this out with those on the far-right. The discussion gradually meandered to the meaning of ‘dharm’ as per different religions, and the tension was diffused. Those labelled as left-leaning in the group, had abstained from voicing their thoughts. They have gotten quieter over the past few months.

Interestingly, nobody gets labelled as a centrist. I guess, for each one of us, we are the the centrists, the centre of the world. (if I am allowed to be even lamer – to us, we are the centroid, the incentre and the circumcentre, too.)

Within the BJP ranks also, there would be moderate and far-rights. A minister in the Rajasthan Government, T Raja Singh on Monday insisted, “The lynchings won’t stop till cow slaughter is banned.” His opinion can be dismissed as that of a political lightweight.

Earlier this evening, Mr Yogi Adityanath, by no means a lightweight, was unequivocal in his stand – “We will provide protection to everyone, but it is the responsibility of every individual, every community and every religion to respect the other’s sentiment. Humans are important and cows are also important. Both have their own role in nature. Everyone should be protected.”

The cow’s life is equal to the human’s, if not more. I wouldn’t mind if a vegan had that opinion. We would have smiled about it and called it a noble thought. In Mr Yogi Adityanath’s case it is setting the tone for the ensuing political campaign.

Or maybe I have a jaundiced eye.

Earlier today, there was news of a Dalit man having been lynched for an affair with a Muslim woman. A right-leaning website lamented that this article had been blacked out/muted by the media which has gone to town regarding the lynching of Rakbar. The same deserves equal condemnation. One wonders if this has not received the necessary limelight because it doesn’t suit a particular narrative that is being built. One wonders if certain other sections of the media are sympathetic because it helps them deflate an otherwise ballooning issue.  One can keep wondering, but Khetaram Bheel is as much of a victim as Rakbar Khan. One hopes his death is not condoned by anybody, the way Rakbar’s is by certain sections.

The cynic in me wonders if the Opposition/Congress would consider the news of a lynching to protect the cow as good news for consolidation of its beef-eating Hindu votebank, Muslim votebank and a gentle nudge on the conscience of the moderate right-wingers who would not like to see blood on their hands.

Even as I write this, The Republic’s Twitter handle has announced its topic for tonight’s debate – Mobs being unleashed to stop Modi in 2019. #MobsForVotes. Definitely, a sentiment they would like to exploit on behalf of the government.

Clearly, lynching is a political issue now and different narratives will be drawn to cater to different votebanks, by different parties and their media agencies.

In this tussle for scoring political brownie points, what will get forgotten is that Rakbar was the sole breadwinner for a family comprising of his wife, seven children (there was a joke on the number of children, but I will write a post on the misconception about the Muslim population growth being higher than other communities in another post) and parents. Hope, even if  it is just for political mileage, someone would bother to help them out.

I wonder what sense Rakbar’s little children would make of the lynching.

PS*: By far right, I refer to those who voted for the BJP to build the temple. By moderate right, I refer to those who were fed-up with the corruption in the UPA II regime and voted for the BJP for development. The moderate right, I feel, vociferously defends the government on all its economic decisions, and quietly condones/mildly objects to the religious/political excesses (this picture of the moderate right is being drawn by someone who has been labelled as far-left by most. So, I concede I could be very wrong in suggesting how it is).

PPS: In December 2015, I had come across this piece of fiction – A pound of flesh – inspired by Akhlaq’s Dadri mob lynching. I still remember what I had thought around the time of the incident – that this was a one-off lynching and maybe we were overreacting. How wrong was I? It seems like a long time ago now.

1 thought on “The politics of lynching”